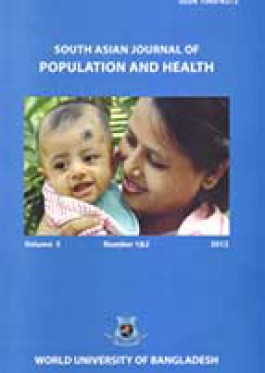 DETERMINANTS OF AWARENESS OF AND ATTITUDE TOWARDS HIVAIDS: A STUDY IN BANGLADESH

This study explores the determinants of awareness of and attitude towards HIV/AIDS in Bangladesh using a purposive sample (N=1386) covering all the administrative divisions of Bangladesh. Analysis suggested that 78.4% of the respondents had ever heard of FHV/AIDS. Respondents mentioned "unsafe sex" and "use of HIV contaminated blood" as the main routes of HIV/AIDS transmission. More than half of the respondents showed negative attitude towards HIV/AIDS. Regression analysis revealed that respondents who aged less than 20 years, male, unmarried, from urban areas and had secondary education or above were more likely to be aware of HIV/AIDS. While respondents who were aged less than 20 years, non-Muslims, had higher than secondary education, from areas and had reported at least one mass media (radio/television/newspaper) as of HIV/AIDS information were more likely to show positive attitude towards MV/AIDS. The study recommended the effective use of mass media in HIV/AIDS campaign

In this paper, we analyze the binary longitudinal data collected by Bangladesh Institute of Research for Promotion of Essential and Reproductive Health and Technologies (BIRPERHT) to identify the potential determinants of antenatal care seeking behavior in Bangladesh. The maximum likelihood procedure is very complicated for the longitudinal setup. For this reason, we employ the generalized quasilikelihood (GQL) approach (Saturday, 2003) by considering the true longitudinal correlation structure to estimate the regression effects consistently as well as efficiently. The method of moments is used to estimate the longitudinal correlation parameters.

STUDIES ON SOCIO-DEMOGRAPHIC CONDITION, HEALTH AND NUTRITIONAL STATUS OF THE SELECTED-BREAST CANCER PATIENTS OF BANGLADESH WITH SPECIAL REFERENCE TO DIETARY HABITS