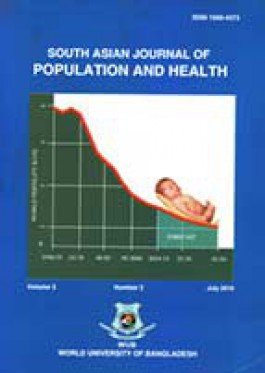 FERTILITY AND ITS PROXIMATE DETERMINANTS IN OMAN

Oman is passing through a crucial phase of social, economic and demographic transition. This paper provides critical review of the fertility levels and trends in Oman and examines that role of the major proximate determinants of fertility on declining trends in fertility in Oman. The analysis reveals that the recent surveys recorded dramatic fall in the level of fertility in recent years in Oman. Fertility has declined from a very high rate of 8.6 births per women in 1988 to 5.1 births per woman in 2000, that is, a decline of three and a half births per woman or a decline of 41 percent of total fertility over a period of twelve years. However, Omani women still prefer larger family (6.4 children) than they actually have. As the desired family size is still very high and the age at marriage is rising, couples tend to achieve their desired number of children by continuing fertility until the end of the reproductive period. The average birth interval in Oman is about two years (25 months). The delay in childbearing through increase in age at marriage for women and spacing births through increased use in contraception among younger women are the most instrumental factor of observed decline in fertility in Oman. The analysis of the major proximate determinants of fertility suggest that until recent years, lactational infecundability closely followed by marriage pattern plays the most prominent part in reducing natural fertility and contraception has the next important fertility inhibiting effect.

Knowledge of Infant and child mortality situations is of great importance for planning population and health policies of a country. Employing the 2007 Bangladesh Demographic and Health Survey (BDHS) data, the present study made an attempt to examine the link between several socio-economic, demographic and health care related factors and infant death during early, late and postnatal periods utilizing polytomous logistic regression. It is depicted in the present study that most of the infant deaths which occur during first moth of life are related to health care and delivery complications related factors. It is argued in the present study that if the pregnant women are encouraged to take more antenatal care, it may help them to identify any complication which they might face during delivery and can be transferred to the hospital immediately in the case of any emergency. This might help reducing a significant number of child deaths during infancy particularly those occurring during their early days of life.

The main goal of this article is to identify the important factors and causes that affecting child morbidity, especially, major life-threatening vaccine-preventable childhood diseases in the urban slum areas. In Bangladesh, the Expanded Programme on Immunization (EPI) provides protection against Diphtheria. Hepatitis B. Measles, Whooping Cough, Polio, Tetanus and Tuberculosis. From the analysis it is originated that most of the slum dwellers are illiterate as a result their children suffer mostly life-threatening childhood diseases. Family income is found to be significantly associated with child morbidity and the children who belong to lower income group have higher percentage of suffering from major vaccine-preventable diseases. Besides, type of drinking water shows significant relationship with child morbidity and it is observed that safe water reduces child morbidity. Moreover, the children, who are vaccinated as well as visited hospital regularly, have lower percentage of suffering from major life-threatening vaccine-preventable childhood diseases than that of their counterparts.

DIETARY PATTERN OF FISHERMAN IN BANGLADESH

The study was conducted during 2010 among 121 selected households and the empirical data were collected by using pre-tested questionnaire from in a fishing community of the village named Dhanki Para of Katiadi Upazilla in Kishoregonj district of Bangladesh. Among 121 households, 52% were fishermen, 30% were farmers, 7% were businessmen, 5% were day laborers, 3% were in service and also there were 3% rickshaw pullers. Again, 29