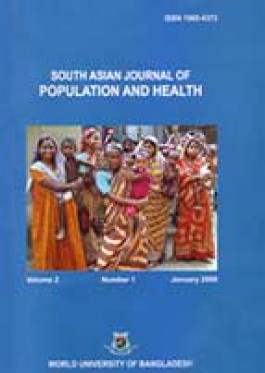 NUTRITIONAL STATUS OF UNDER-5 CHILDREN IN BANGLADESH

Protein Energy Malnutrition (PEM) is a major health problem in Bangladesh and it affects the physical growth and logical development of children. Data from the 1999-2000 Bangladesh Demographic and Health Survey (BDHS) was used in this study to explore nutritional status of children aged 0-59 months. The prevalence of malnutrition is assessed by three standard anthropometric indicators: underweight, stunting and wasting, following the WHO guidelines and cut-off points. The distributions of Z-scores for the study children showed considerably far downward distributions for all indicators from the reference population mean zero. In addition, total stunting, wasting and underweight were observed in 44%, 10% and 47% (among them 18%, 1% and 13% were severely stunted, wasted and underweight) of the children respectively and the trends in prevalence of malnutrition are increasing after the 1999-2000 BDHS. The study points out that, malnutrition is one of the most critical components for child health that affects almost 56.5